As I'm sure all of you are aware Cliviger Fishponds has taken a bit of a battering over the last few years. You will know that there has been heavy siltation on the site and the silt trap and pegs were in disrepair to say the least.

In December last year we were lucky enough to achieve a grant of £10,000 from the Lancashire Environmental Fund to return Cliviger to its former glory. Unfortunately we weren't able to secure other funding for the site so the committee of TAS voted to use existing club funds to pick up the shortfall and carry out the works.

Today I can announce that the work is now completed at the site and we can inform you that we have removed 280 tonnes of silt from the pond, reinstated the original silt trap, used 120 tonnes of reclaimed stone to strengthen and improve bank access and replaced all of the old pegs with new scaffold frames and recycled plastic stages.

This work would not have been possible without the grant from Lancashire Environmental Fund and its with their help that we have renovated Cliviger Fishponds to its former glory and guaranteed its future for many years to come.

As part of the agreement we will offer free of charge fishing on the ponds every Friday in July 2021 and we will have coaches and experienced anglers on site to offer guidance to anyone that would like it.

The place will reopen Saturday 14th Nov, unfortunately without a ‘grand opening’ due to Covid but we’ve rearranged this for when we stock the fish.

The car park is a very very slow burner but personally I’m very hopeful as things are progressing well, but it’s a matter of brokering the right deal, there’s no point having a car park that costs £2000 per year. Leave it with us.

The silvers that have shown in there since the work has been incredible, no idea where they came from but there’s a cracking stock of roach up to around 1lb.

The plan (the plan not set in stone) is to stock bream, tench and a few carp, including1 x 20lb carp named ‘ Ray’s fish ‘

The stocking will be done late March / very early April depending on the weather and when we stock the fish this is when we plan to ‘reopen’ cliviger fishponds as ‘Barbers Pools’ in memory of the late Ray Barber who served the club for over 40 years.

I hope this clears a few things up as I know you’re all chomping at the bit.

Sadly, on Friday 29th May 2020, ‘Mr Tod’ himself, Ray Barber, passed away at home after a lengthy battle with cancer.

Ray had served Todmorden Angling Society for over 40 years as match secretary, treasurer and secretary of the society.

His no nonsense attitude made him a legend in the angling community and even prompted an article by the Canal & Rivers Trust in 2016, in which they described him as ‘a major character in the North West angling world’ and titled the article ‘The Barber of Todmorden.’

Ray Barber was Todmorden Angling through and through and has been fundamental in the development of the society since the early 60’s.

His legend is told through the restoration stories of Cliviger Fish Ponds in which the society had £8500 in the bank and decided to spend £8000 on the purchase of the Cliviger site. Months later, lottery grants later and hours of fund raising later, Cliviger Fish Ponds offer a beautiful, scenic setting and fantastic pleasure fishing set in East Lancashire.

A similar story can be told of New Mill Dam (folly), Ray was instrumental in the resurrection of the site and acted as the project manager to restore Folly from the derelict site it was. Folly now offers great fishing in a picturesque landscape in Todmorden Town.

Other projects included Grove Lodge and of course the flagship Croft Head and Lower Townhouse sites.

Mr Barber was a stickler for the rules throughout his 40 years at TAS, this came as no surprise as Ray was a railway signals engineer, by trade, and in later life a union recruiting officer for the Transport Salaried Staffs Association.

Ray will be sadly missed by all at TAS and undoubtedly by the North West angling world.

Todmorden Angling Society sends its deepest condolences to his wife Jean, their son, their daughter and the rest of his family.

For any enquiries or issues relating to Todmorden Angling Society they should be directed to Mr. Nick Noble 07534601421 or nickn_ebor@hotmail.co.uk

As things change moving forward we'll keep you all up to date but for now we'll wish you all good health.

This barbed hook was found on one of our waters today, its unacceptable for anyone to use barbed hooks on our waters and more rig checks will be carried out, anyone found to be braking any rules be it size of hook, barbed or whisker barbed or not using running rigs when ledgering will have the card taken and asked to attend the next committee meeting, in accordance to rule 16.

Rule 16... “16. Any member is eligible to be expelled for breaking club rules, or caught or reported causing public nuisance on our waters. Their licence may be confiscated, and reported to the Committee. The member should appear when asked, to state their case. If no appearance at requested meeting, expulsion will be automatic, sine die. If any member expelled continues to fish our waters it could mean prosecution for poaching, trespass, theft and civil disobedience, for any of the above. Members have the right of appeal against expulsion.” 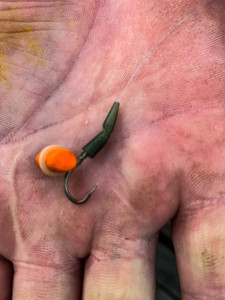 The Angling Trust has called on the government to do more to protect rivers and lakes from fish-eating birds.

In a letter to Environment Minister George Eustice, the Angling Trust is demanding a doubling of the number of cormorants licensed to be shot in England annually to 6,000. It also calls for the relaxing of the requirement for evidence that goosanders are damaging fisheries before a licence will be issued.

The Angling Trust says the new measures are needed to halt the decline in coarse and game fish in England, particularly endangered salmon and eels which are now at critically low levels nationally.  Other species such as roach, dace, trout and barbel have also seen numbers fall in many rivers and lakes.

The letter coincides with the launch of Cormorant Watch 2 – a website where members of the public can record sightings of cormorants, goosanders, red-breasted mergansers and their roost locations.  Over 120,000 sightings of birds were recorded when the first edition of Cormorant Watch was launched in 2012, which helped the Angling Trust make the case for the introduction of Area-Based Licences (ABLs) for lethal control of birds, which have reduced bureaucracy and costs for hard-pressed fishery managers and angling clubs. We urge all our members to report any sighting on any of our waters to this website.

Pressure from angling organisations and angling-related businesses initially saw a previous government introduce a limit on cormorants licensed to be shot of 2,000, with a temporary increase to 3,000. Since then, the work of the Angling Trust has led to fishery managers applying for a far greater number of cormorant licences.

Despite this progress, angling’s representative body believes that a new annual limit of 6,000 for cormorants and a simpler process for licensing the control of goosanders to enable far more than the 283 shot last year are both required. The low number of goosander licences issued is despite the fact that fisheries have put in a huge amount of volunteer time and effort to provide evidence by organised bird counts to prove to Natural England that larger numbers are needed to protect fisheries. Natural England have rejected several strong cases for goosander licences on the basis of insufficient evidence of need for lethal control.

The Minister promised in a letter to the Angling Trust in 2013 that he would review the upper limit of cormorants licenced to be shot if there was evidence of demand. After two winters of licences exceeding 3,000 birds, the Angling Trust believes that this condition has now been met.

The Angling Trust continues to believe that the best outcome would be for cormorants to be included on the general licence as long as the conservation status of the birds is not threatened.

Fill in any sighting on this web page cormorant watch 2

An update of the improvment work on Summit

Thursday 22nd Adam, Tony, Frank and Stephen spent a very hot evening digging the Iris plants from the fields adjacent to the canal and bagging them up in special bags ready for them to be planted into the canal the day after, approx. 50 bags where made up and to put that in to concept there are between 3/5 plants in each bag and would cost well over £1000 to purchase.

Friday 23rd the lads and the CRT planted 50 bags of flag iris and 16 sapling willow trees to the far bank of the length.

It has added immediate impact on the length and looks great, hopefully they will all take and grow and spread well over the coming years.

Adam Jagger Canal Committee secretary said “off myself and Tony a massive thank you to Stephen Svejnoha and Frank Zac for coming and helping dig the iris on Thursday evening and again to Stephen for driving back over again today(Fri 23rd) and helping with the planting and more good news in that the CRT and Jodie Weathers team have given their support for future canal improvement works which is fantastic news so I'd like to say to Jodie thanks so much for everything you have done for us and your support for what we are trying to achieve.”

Check out the gallery for more pictures.

Todmorden Angling Society are committed to improving all our waters and this includes the Rochdale Canal.

On Thursday 25/5/17 The Canal and Rivers Trust sent a team to work along side a work party orginised by the Canal Committee to work on the Summit Length to try and improve the fish habitat, the day went well in some very hot conditions, but there is still more to do and the CRT have agreed to give us use of their equipment and a couple of bodies to plant some iris that is growing close by if we can get permission off the land owner to take it.
Adam Jagger our Canal Committee secretary said "They (CRT) have spent £2000 on today for us and them giving us their support going forward is brilliant for the club".

Check out the gallery for some pictures.

"The angling club run regular matches on this pound, but they noticed that their catches predominantly adult fish, but with very few juvenile fish being caught. Working together, we came up with a plan to improve the habitat for the fish, provide spawning habitat and cover for them. Volunteers from the club and Canal & River Trust staff had a successful day hammering in stakes and installing the pre-planted coir rolls. The club also have plans to continue with the environmental enhancements work, which not only help the fish, but have wider benefits to the canal corridor."

The lines and wires accross our waters are there to try and provent preditory birds from landing to protect our fish stock, anyone found tampering or removing them will have there licence taken and asked to appear at the next committee meeting.

We are trying to establish the actual damage Cormorants and Goosanders are causing to our fisheries.
Can members please post on the forum or here -types of birds present, which water and numbers of birds with time/date?
Can members also please take photos to prove what they are saying-i.e. take photos as well.
If possible video Cormorants flying over our waters.
Please send Dave Dempsey photos/videos by e-mail or text 07880-823630 e-mail david.caffeshop@gmail.com
Will matchmen and pleasure anglers take photos of damaged fish caught -and e-mail to Dave.